This is a precautionary tale for those party animal hedonists who are too selfish to care about others when staying at busy hotel chains. Imagine, if you will, one such story of Case Cherry… who entertained far too many people by hosting a noisy, feral party… much to the annoyance of other regular guests at this particular hotel. Then on the morning after the night before… Case is confronted by one such angry guest who just happens to be Miss Bernadette! She barges into Case’s room, the girl is unaware of just who she has royally upset but she is about to discover the hard way, just who! Bernadette chastises her how girls who selfishly party the night away will be punished for their sins! Bernadette then drags Case over her lap, the young girl is still in shock that she is getting spanked but the humiliation goes up a notch as her tight panties are quickly removed too. Her pert, tight bottom bounces and jiggles as she is given a thorough hard hand spanking by Miss Bernadette. The punishment is far from over, she is treated like a slut, and her legs are splayed as Bernadette admonishes Case, continuing with the bottom smackings. The leather strap that Bernadette brought with her into the room is used next across Case’s reddening, sore behind… the hapless girl is placed over the couch and given a proper leathering that has her gasping out loudly in disbelief. Now she knows the hurt of payback for her party antics from the night before. She is left to contemplate more of the same, clutching and rubbing her sore, aching bottom… that there will be more of the same if she dares ruin any hotel guests’ stay in the future! 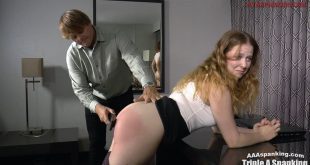 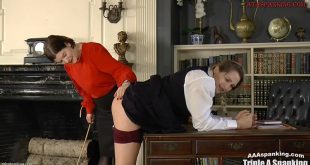 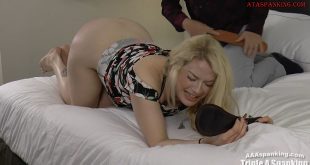 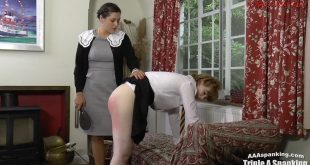