The Spoiled Daughter is Paddled – Universal Spanking and Punishments 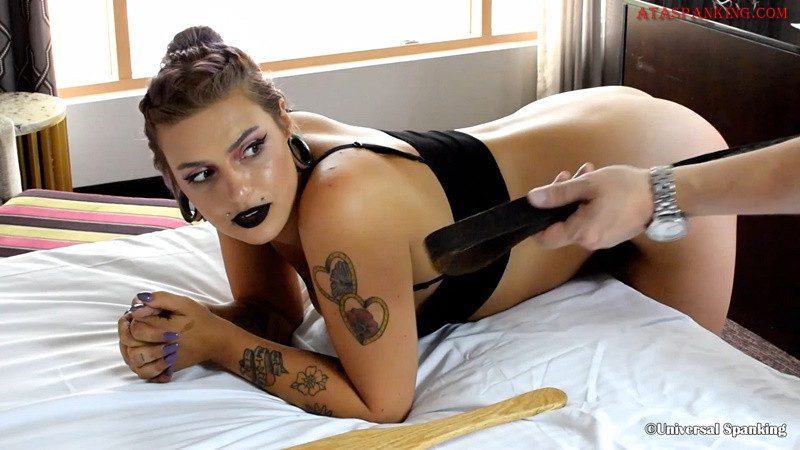 Leanne is a spoiled brat! She gets almost everything she wants and rarely ever gets spanked, however when Leanne does get spanked she remembers the lesson for awhile. One thing Leanne has been allowed to do that most girls her age aren’t is to get a tattoo or two. Her step-father wants her to feel a bit of freedom, but often times Leanne takes advantage of the loose rules and sometimes punishment must be given. In this case, Leanne leaves her door open when changing, and when her step-dad walks by he notices that Leanne is now covered in a new tattoo that he did not authorize! Leanne gets cocky, she feels entitled to do as she pleases, but reality kicks in when her step-father bends her over the bed and starts spanking her sassy little behind.

Based on attitude and tone alone, her step-dad knows that this is going to need to be a thorough spanking and it most certainly will need to bare bottomed! In fact, shortly after the spanking begins her panties come down for the duration of the punishment. Leanne’s step-father isn’t going to take the disrespect and the disobedience anymore, he gives her a hard hand spanking and let’s her know that the belt is going to be used, and that she’s also going to be getting a paddling. Leanne often giggles and laughs during hand spankings and not taking the discipline seriously as all, though the sass tends to stop once the belt and the board come out!

It would be fair to say that a belting and a paddling have helped a lot of girls when they lose their focus. Leanne tends to need the punishment that only a step-father can give from time to time or she falls off course. The belt always stings her, but after those first few strokes land she knows who is in charge again and what happens when she messes up. The wooden paddle on the other hand drives a lesson home, the burning feeling that repeated swats give her ensure better behavior for a good long while. Does Leanne hate the swats, of course she does, but they remind her that there’s someone who cares enough to correct her just when she needs some discipline the most.

Previous Spanked By My Best Friend! – Universal Spanking and Punishments
Next A Hairbrushing AND A Hairbrush Self-Spanking 4K – Ariel Anderssen Studio